How to maintain a lead in Rocket League

In this article, Hoodyhoo looks at the way that you can hold onto a lead in Rocket League, exploring the notion of ‘game management’ and giving you tips to hold out for more wins.

Don’t worry, you are not alone. In my experience, holding on to a lead seems to be one of the more difficult tasks in Rocket League. With the right approach, though, you will never have to experience it again.

Here are some of the things you should try to keep in mind when you find yourself with a lead in Rocket League:

The most important thing to remember is that with a lead your approach to the game should change.

Growing up, I played baseball. My approach as a batter with a fresh count (0 balls – 0 strikes) was VERY different to my approach when I was on a 0 – 2 count. This shift in approach applies in many traditional sports as well as many esports games. Let’s call it ‘game management’.

Let’s ask ourselves some questions: when the countdown for the game begins and both teams have 0 points, what is the objective? I would say the objective to score a goal. To do this you may have to take some risks and play with some positional aggression.

Now, let’s ask ourselves that same question but the circumstances have changed: your team is up 3 – 0 with 2:55 on the clock, what is the objective? I would say to maintain any point value lead while letting the clock run to 0.

In this instance, only 2 mins and 5 seconds have passed in the game. But those goals make all the difference. You now need to treat the game entirely differently based on the game state.

Game management is a skill that requires conscious awareness of the game state. Playing on auto-pilot and failing to account for the current circumstance is what causes blown leads.

These sorts of problems are extremely common in Rocket League but the good news is the fix is simple. The primary skill you need to work on is your mental approach to the game. You do not need to grind away at a specific training pack for hours on end or sit in freeplay to practice a new mechanic.

First, let’s talk about some general occurrences or decisions in Rocket League that may be harmful or beneficial to maintaining that lead.

We will start with some harmful decisions that may set your team up to lose your lead:

These sorts of problems emerge when you push all 2 or 3 of your team’s players into the offensive 3rd with no regard for defence.

While this can certainly result in some sick plays, it most commonly results in your opponents walking in a free goal.

I know, I know. When is there a better time to practice those ceiling shots and flippery sets than when up 3 – 0?

Obviously, there isn’t a better time! But realize that trying these high-level, aerial mechanics will leave you out of position, out of boost and typically result in your teammates being left in a tough spot.

When the opponents exploit the numbers advantage, don’t you dare “What a Save!” your teammate!

When you have a lead, you do not NEED to score. It is a win for your team if you just maintain possession of the ball for 30 seconds; even without threatening a goal.

Far too many times players begin to recklessly and needlessly dive in or challenge everything. Mix in some fake challenges to bait the opponents into handing your team possession.

Now, let’s discuss some decisions or situations that may help your team maintain that lead:

While this may not get you on gifyougame’s Top 10 plays of the week, it WILL get you more wins.

Prioritise defensive play does not mean that you need to play goalie and sit back in the defensive third. It is just a switch in approach.

Your teammates’ centre is going to be contested by the defence? Turn and head back instead of racing the opponent to the ball.

These small changes in decision making can be the determining factor of winning or losing a game.

This cannot be overstated. C9 is one of the best teams in RLCS at this particular skill. When those guys build a lead, their entire playstyle becomes about keeping the ball away from their opponents.

Not only does this approach run precious time off the clock it is also infuriating to your opponents. They can feel the pressure of having less and less time to mount the comeback.

Taking the ball back to your half or even a smart* back pass are great ways to maintain possession and run some more time off the clock.

The great thing about possession is that there is not a specific location you are trying to advance the ball toward. When your objective is to score, the opponents are fully aware of where you need to take the ball: their goal.

We all daydream of those beautiful Rocket League highlights: insane off the ceiling redirects, the juicy flip reset or that prejump from mid-field. Hitting these shots is what keeps most of us coming back for more!

However, although the thrill of hitting the best goal of your Rocket League career is incredible, it is also a major risk.

Next time you find yourself with a lead in a game, try shifting your approach to the game. I’m willing to bet those leads are lost far fewer times with a proper approach! 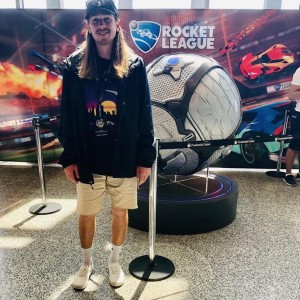