Tips on How to Speed up in Rocket League

Unless you’re completely new to the game, you’ll know that playing fast and speeding up in Rocket League are vitally important.

Going supersonic is only the beginning. To really rank up, you have to start implementing some of these tips and tricks to beat the opponent to the ball and keeping possession as much as possible.

Do you find yourself struggling with any of the following:

The list could go on but if you found yourself nodding along, then this is the article for you!

#1 Getting supersonic as quickly as possible

At a basic level, you should know that:

At the intermediate level, you should be looking at:

At advanced levels, you will start to see:

At the most advanced levels:

#2 Mechanics you can practice

Here are some useful mechanics you can use to preserve your speed:

The tornado twirl can help you to get max speed from a standing position.

You can do the Tornado Twirl in three simple steps:

1) Tilt your car slightly to the side
2) Boost the entire time
3) Side flip.

The reason this is better than a normal front flip is that you can keep boosting the whole time.

The half-flip is a beginner mechanic that I recommend all my students learn if they haven’t already.

Doing the simple half-flip with an air roll is only the start to this mechanic. You can half-flip in any direction if you take the time to practice it and understand the mechanic behind it.

Drifts make you turn quicker, more precise, and if you combine a drift with reversing your car for a split second, you can do the fastest 180 stop in the game.

Empty jumps off walls and ceiling:

Empty jumps speed up recovery from ceiling and walls.

All you have to do is a jump off the wall, air roll your car so the roof is facing the ground and do an empty jump to reach the ground quicker.

Flip resets off the ball to recover:

Alright, so this one isn’t really something people go for except for in some situations where it might be extra fancy to get a flip reset off the ball and do a wavedash into a dribble play.

When you do get a flip reset off the ball and can’t go for a shot, don’t waste the flip. Use it to either wavedash or flip away to recover after the play.

This one is pretty obvious but at lower levels, people tend to be really nervous on the wall.

Boost to the ball with your nose pointing at the ball as soon as you jump off the wall.

If you master this you’ll beat, everyone, to the ball.

Here are a few more ways you can manage your boost to play faster:

If you have been playing this game for a while, you’ll start to develop a wicked sense for when the boost spawns.

In a lot of situations, taking a super quick look at the time when you grab a boost will give you the aim hack flippin’ ability to magically summon the boost 10 seconds later.

Use this and your opponents won’t even see the boost spawn.

I’ve been coaching for a little while now and I’ve noticed people below champ rely heavily on the big boost, only feel confident to go for aerials with 100 boost and almost completely ignore all the little refills on the map. It’s like they don’t even exist.

I hope these tips are a whistle-stop tour of things you can work on.

Ultimately, you need to be pro-active in the way you think and play the game. When you think you should go for the ball then just go for it.

Over time, your judgement will become more accurate and you’ll make better decisions. But it’s better to go for it rather than sitting back in net.

I made this video which goes over the points we discussed with some examples. Make sure to check it out as well as my coaching profile too. 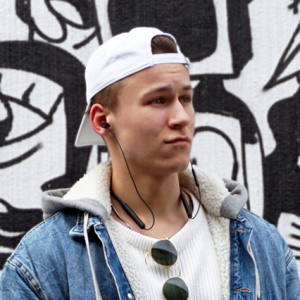